I had a big pleasure play concert with excellent polish sax player, Mikolaj Trzaska. I hope we can do it more.

Here You can find part of my solo performance in Munster. Thank You for Erhard Hirt for invitation. It was premier of my solo CD - "Sonor Forms" released in Transidiomatics series by DTS Records.
Autor: Rafal Mazur o 06:50 Brak komentarzy:

At the beginning of December Ensemble 56 played amazing concert on "Krakow Jazz Fall" Festival in Alchemia. It was 1,5 hour of energetic music. Before it we played concert in Poznan, at "Dragon" club, and in Warszawa in "Moving Closer" Festival organized by my friend Darek Makaruk.
Autor: Rafal Mazur o 06:45 Brak komentarzy: 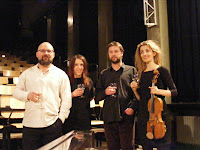 Last guest of  :Laboratory of Intuition" year 2009 was amazing viola player - Charlotte Hug. We played concert in quartet with Mazrena Lis on piano and Tomek Choloniewski on drumms. It was great music, Rafal Drewniany from DTS Studio recorded everything and I hope You can listen it in future.
Autor: Rafal Mazur o 06:41 Brak komentarzy: 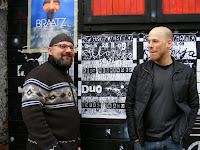 In November I met with my friend, Keir Neuringer and we played few concerts - two in Krakow, one in Ljubljana nad one in Budapest. It was really amazing time. First concert was in trio with our friend Tomek Choloniewski, he played ion drumms, in Eszewerie - small club in Krakow. next two concerts was in duo - in Milestone in Krakow and in Gromka Club in Ljubljana (it was in Defonija series organized by Miha Zadnikar - photo). Last concert was in Budapest in Artus theater after premier of new performance amazing hungarian dancer Eszter Gal. We played with 5 hungarian improvisers - event was organized by Attila Dóra. Now we (me and Keir) waiting for our premier CD which will be released next year by Not Two Records. And in April we will play and record in our new project, trio with excellent drummer Raymond Strid.
Autor: Rafal Mazur o 06:36 Brak komentarzy: